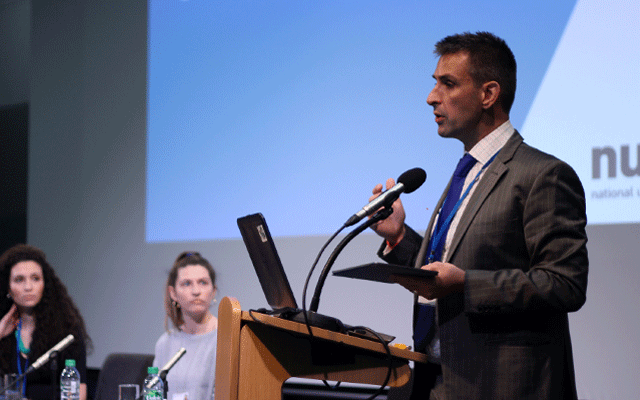 Our final social leader in this series is Simon Blake OBE. Simon is currently the Chief Executive at the National Union of Students which exists to advise and support students’ unions to represent the voices of seven million students across the UK. Simon is also a Trustee of Stonewall and former Chief Executive of the young people’s sexual health charity Brook. Simon is very active on Twitter both personally and on behalf of his various roles. Here are Simon’s thoughts on being a social leader (as always, the transcript is below the video)…

What are your social media platforms of choice and why?

Twitter is the obvious one because it does photos, it does news, it does inane chit chat. I increasingly use Instagram and Facebook less and less – Twitter just seems to be the one that just rides through pretty consistently.

How do you believe that your use of social media has benefited you in your leadership role?

I think it makes you human and if the first point of leadership is being human and being authentic and being trusted, then it is a clear way of doing that. In terms of connectivity with others outside the organisation, reaching people you might not otherwise have been able to do, connecting up, but also people from within your organisation, from within your sector, learning a bit more about you, feeling a bit more connected to you. And then there is a whole other side of it which is actually it’s the place where you find out a lot, learn a lot, understand a lot, get other people’s insight and ideas which all adds up to a heady mix of being a critical part of being a leader.

How engaged do you find the rest of your organisation with social media?

At NUS it won’t surprise you to know that there is a huge level of engagement with social media. Students and Student Officers use all sorts of platforms in order to connect and communicate with each other and sometimes to the point where you think, “Hold on, that thing you’ve just published on Facebook should actually be on our website” or “I would have been interested to have learned about that inside the organisation rather than on social media”. Across the organisation we have got a staff team who are very competent and connected on all forms of social media, but also a group of leaders, committee members and volunteers who are digital natives and learning, thriving, developing and teaching us all the way through.

What, if any, downsides do you see to being a leader on social media – and what do you do to avoid them?

I think the obvious one is that every decision you make, people have immediate recourse to feel as though they can talk to you 24/7 and don’t necessarily operate with the same courtesy and dignity which they would sometimes do in person. Those things clearly shift the way that we work, the way that we think and the amount of time that people can have access to you. How do you manage that? It is up to us when we answer, how we answer and what we answer. I think we all have to take responsibility for that. Whether that is just simply ignoring it, saying “actually    can you email me this or can we talk within these hours”, or “can we conduct this a little bit more respectfully?” In the same way that you have to be a leader in the way that you communicate with people in person, the same is true on social media. I think sometimes we forget that it’s the same rules of the game, it’s just a different platform and a different way of doing it.

I guess the ones which are perhaps most troubling are the moments where you think “I’m not part of this discussion and suddenly you’re coming at me at 11.00 at night” or “I did start this discussion but I didn’t think it was going to be this controversial and actually I’m at a friend’s birthday party or somewhere else and I feel like I do need to engage with it but I don’t want to for very long” – I think that’s about us just learning how to make sure that you are conscious that there may be unintended consequences. People may decide to communicate with you in a way and at a time that you don’t want that to happen and how do you finish that without it being disrespectful or manage it in such a way that people don’t feel you are shutting them out? I said something recently where somebody clearly completely disagreed with me. I said “Let’s just agree to disagree” and their immediate response was “I hope you’re more respectful with other students who try to engage with you online.” I thought “It’s not that I’m being disrespectful, it’s just that I’m not willing to argue this point”, so saying “Let’s just agree to disagree” seemed to me a perfectly reasonable way to do it. I guess, I may have said it with a nicer tone or wrapped up in a couple of sentences in a real conversation, whereas with 140 characters that seemed like a reasonable thing to do.

How have you used social media to connect with your key stakeholders?

If you don’t overthink it, that’s what you actually do naturally isn’t it? I think that sometimes if you are good at communicating or good at connecting, you use social media as a route to doing it more quickly and easily. One of the things which interests me is that I woke up this morning with direct messages on Twitter which were connected with work, some from Facebook and some via email. Historically, I would have thought “hold on a second, what are you doing messaging me in different ways for work-related things?” whereas now I think that is just the nature of what you’re doing. You’re connecting with people through different mechanisms and routes. Unless you deliberately try to keep those boundaries, that is increasingly going to be the way that it’s going to happen: people will find you however they want to and connect with you in that way. Sometimes, very deliberately, I have thought “we need somebody to publicise that”. So when I was at Brook, we would try to get people to support the comedy gig online. At Stonewall, trying to get some people to endorse or retweet and sometimes literally saying “I know we haven’t had a chance to meet but let’s have a conversation” and often people say yes, whereas if you go through formal channels, there might well have been five people saying “no, you’re not going to that person”. People can get to you who would not otherwise have been able to get to you and you can get to people in the same sort of way. I had a conversation this morning with someone from Celebrity Big Brother who wanted to talk to me about some voluntary work I’m doing. Ordinarily, his agent would have tried to talk to my assistant and it would just never have happened, whereas instead it’s just “yeah yeah, OK, I’ll send you an email”. Interesting times!

What advice would you give to other leaders who want to use social media?

Just do it. Find your own voice, find your own style. Don’t be a one-trick pony – don’t be a different vessel for your press releases to get out. Have conversations. Almost be like you’re at a party – you can talk seriously for a minute, have a joke, talk about your family, whatever it is: it has to be a combination of things. Just try it and find your way. I honestly think that there is no single bit of advice you can take other than try it, don’t be scared of it, use your own voice, sometimes you’ll mess up – just apologise for it. Don’t assume that it can be as polished as it would if it went through your corporate communications function – and that’s okay.

That is the final instalment of our social leaders series. We really hope that you have enjoyed hearing the thoughts of all the brilliant folk who spoke to us and that they will inspire you in your use of social media.